Utilization of Solar on Farmland 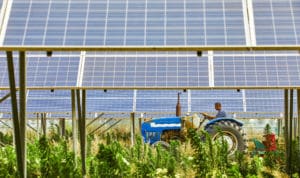 Agriculture plays an important role in the U.S. culture and economy and could play an integral role in distributed energy generation. Solar energy offers farmers an opportunity to decrease pollution, lower energy costs and reduce electric grid infrastructure overhauls. By integrating solar arrays with existing crops, many farmers could nearly double their financial output from suitable land, or utilize a more conventional leasing method to turn a profit from unused land.

While smaller scale solar has already been implemented on many farms as a means to supplement traditional energy sources, combined-use farming, or agrivoltaics, has the potential to open up a variety of new possibilities.

Pilot projects have seen encouraging results in Arizona, Massachusetts, Germany, Japan, China, and France, among others. These so-called “dual use” farms have shown the ability to both produce electricity and grow crops at the same time, with 1- to 1.2-meter gaps between panels giving nearly identical crop yields when compared to full sun growing sites. 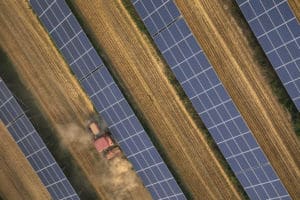 In some states like Illinois, new state law requires 25 percent of power to come from renewable sources. Many are concerned the shift could permanently damage the agricultural landscape by removing too much pastoral land. While leasing land for a traditional solar farm is a lucrative option for many, a combined approach can preserve that land and create a more sustainable model for the future. Additionally, in more remote areas a large scale solar installation is often not an option due to poor electric grid infrastructure. In these cases, a smaller combined installation will often make more sense, especially when paired with a battery storage solution to capture excess energy production.

American farms will likely favor leasing their acreage for full solar farms in the near future, but in other areas such as Europe where agricultural land is less plentiful, agrivoltaics may prove a cost-effective solution to accelerate the adoption of solar.

As Frank Jossi of Ensia.com writes:

“There are a lot of different ways to design solar arrays that provide significant benefits to agriculture,” Davis says. “One of those ways that is certainly the most cost effective — and continues the accelerated rate of large scale solar needed to address climate change — is creating pollinator habitat in and around solar projects.”

Native plants have their own challenges, such as the perception of higher up-front planting costs partly mitigated by less required maintenance. Not all a solar farms’ neighbors are in love with natives, either, due to their sometimes less-than-tidy appearance. Yet Davis argues American farmers are on board with more native habitats because without pollinators their livelihoods could be at risk.

“They understand the need to keep pollinators alive and in abundance” to seed the fruits and vegetables they grow, to maximize yields and to avoid more regulation, he adds. “This opportunity unlocks private sector dollars and deploys solar energy capital in investing in high quality pollinator habitat that is urgently needed in agriculture.”

Farmland installations, especially combined-used arrays, have several factors to consider that more traditional installations such as roof and parking may not have to worry about.

Some of those factors include concerns about contamination or pollution from chemicals within the panels. Most silicon-based PV cells are unlikely to prove a serious risk as installed cells are sealed. Solar modules using cadmium telluride are toxic, but studies have shown that these compounds can’t be emitted from modules during regular operation or even grass fires, as the heat will not be great enough to cause a release of such compounds.

Another factor to consider is access, as some tractors may be unable to navigate certain panel layouts. This may necessitate smaller machinery or hand-maintenance methods. Spraying of herbicide and agrochemicals should not present an issue, however, so long as the panels themselves are not sprayed directly.

While some may be concerned that the panels will heat up crops beneath, the opposite has proved to be true. Solar arrays keep crops cooler during the day and warmer by night. Studies have proven that temperature differences were canceled out, meaning that daily temperatures were very similar to full sun crops, providing almost no impact on growth rates. Panels may actually provide farmers with the means to add shade-tolerant crops to their selection and extend growing seasons for others. 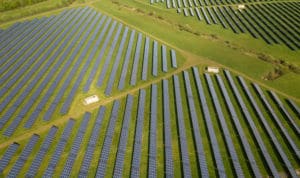 If you are considering solar options for your farm or agricultural land, SCF can help guide you through the next steps. SCF has worked with many farms on a variety of installation types, including combined agrivoltaics as well as more traditional solar farms.

While there is no “one size fits all” solution for farmland solar projects, our experts can help you determine the right approach. PPA financing options are available to eliminate the upfront cost and to lower energy costs upon operation.