Illinois Solar: Can the State become one of the greenest? 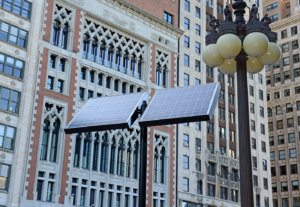 Illinois has finalized their SREC program and it is going to be a monumental boon to the state’s solar market. With less expensive electricity than the North East and fewer hours of sunshine than the South West, the state decided to implement an SREC program with the ambitious goal of providing 25% renewable energy by 2025. The SRECs are particularly useful for financing in the C&I market. Essentially, the commercial blocks provide an additional twenty to fifty dollars per megawatt hour (or 2-5 cents per kilowatt hour) in revenue. In addition, Illinois took the unusual step of creating a 15 year SREC term, but paying for all fifteen years within the first 5 years of a system’s operation. They essentially front-loaded the SREC payments to the system owners.
This effectively makes projects that previously did not pencil, much more tantalizing for financiers – and many of the projects that were tabled in the past can now be built at no cost to the customer with savings in year 1. This is another example of how utilities, governments, and the solar industry can work together to provide well paying jobs while reducing the state’s greenhouse gas emissions.
We can expect Illinois to climb up the ladder of renewable energy production. It is currently ranked 37th in the US with 6.6% of electricity production coming from renewables. If they attain their goal, they will be well on their way to becoming one of the greenest states in the country.