The Future of Illinois Solar

The Future of Illinois Solar

Solar friendly states such as California or Massachusetts have long taken the spotlight when it comes to support, initiatives and funding. When boasting well-funded and wide reaching programs such as SolarAPP and SMART it’s easy to see why. Over the last few years however, a new challenger has stepped into the ring and seems to be here to stay: Illinois.

The Current State of Solar in Illinois

It may not have the year-round sunshine of California, but Illinois has a lot to offer a potential solar system owner. Residents of the state receive not just a 30 percent federal solar tax credit, they are also eligible to take advantage of the state’s Solar Renewable Energy Certificate (SREC) market, a program with big changes slated for 2019.

There is currently a Renewable Portfolio Standard (RPS) mandating that Illinois produce 25 percent of electricity from renewable energy by 2025, and 1.5 percent of that from solar power. Not only are solar system owners able to sell the electricity produced (behind-the-meter & in-front-of-the-meter structures) they can also sell the SRECs as well which helps the state to achieve its solar requirements.

SRECs can vary greatly in price depending on how much demand exists in a given market. System owners often sell their SRECs to aggregators who manage the sale between the state and system owners, paying those owners quarterly over a 5 year span.

Where is the Illinois SREC Program Going?

Illinois government recently made changes to its legislation to alter the REC program, proposing a new structure known as the Adjustable Block (AB) Program, which would provide a new structure lasting for 15 years instead of the previous 5 year program. What’s more, the SRECs under this structure will be sold for a set price as opposed to the variable pricing set previously.

There will now be “blocks” under the AB Program that will determine the new pricing, with an associated SREC price set to specific amounts of installed solar megawatts. Those blocks will fill up and systems will be ascribed to the subsequent block at a lower price, meaning that as more solar gets installed there will be less funds available. The following factors will decide an Illinois residents eligibility for certain blocks: Capacity, Type of off-take (behind, in-front, community, etc.), System Size and Utility.

Below you can see the block and pricing info that the Illinois Power Authority has provided. 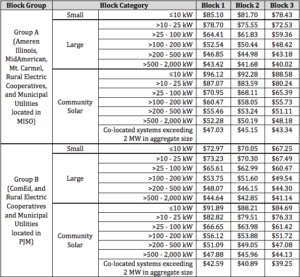 These prices are set for 15 years, although it should be noted that the payments are front loaded over the first five years, making the program even more attractive as far as third party financing.

How Can SCF Help Illinois Off-Takers Access These Blocks?

Sustainable Capital Finance is a commercial & industrial (C&I) solar financier, providing PPA solutions to EPCs and Developers for projects as small as 100kW.

If you are evaluating a project and would like to learn more, please don’t hesitate to contact Dan Holloway @ dholloway@scf.com or fill out our contact form to get in touch with us.