The U.S. Nonprofit sector is filled with entities that occupy, and often, own commercial buildings, with ideal roof and parking space for solar power. With the U.S. Government phasing out cash grants, while extending tax credits for renewable energy projects, it is unlikely that many of these buildings will ever see a solar system on their roof, or in their parking lot. Given that the current Federal Investment Tax Credit (ITC) for renewable energy equates to 30% of the total eligible cost of a solar PV system, this is a substantial incentive that non-profits cannot take advantage of since they don’t pay federal income tax. The typical system suitable for the vast majority of these buildings ranges between 50 kW and 500 kW in size, with a small percentage needing systems larger than 1 MW.

To demonstrate the magnitude of this problem, here are some numbers that show just how many buildings in the United States are currently unable to take advantage of the Federal ITC:

Taking into account just these three categories of energy consumers, we are talking about over 550,000 buildings in the U.S. that cannot take advantage of the 30% ITC incentive. So, what’s being done about this? Let’s explore some different options:

Sustainable Capital (SCF) believes that this is a vast and very under supported part of the overall solar PV market. We offer PPA financing for projects as small as 100 kW and happily support nonprofit organizations. If you are a solar installer or a solar developer, please fill out our partner registration form to learn more. 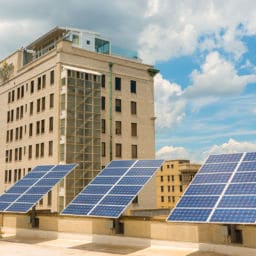