Schools across the United States are searching for solar financing to install a solar array on their campus in order to simultaneously reduce utility costs and their carbon footprint.

According to “the Journal”, a report released in 2012 by Environment California counted 200 solar-powered K-12 schools, with plans for 60 more in 2013. Last year, Hawaii announced that it would put solar panels on all of its public schools by 2017. According to research from Greentech Media, California schools that have gone solar will save an estimated $1.5 billion in electricity costs over the next 30 years. More than 137 megawatts (MW) of solar power capacity has been installed on college campuses, which is enough electricity to maintain 400,000 homes. In 2010, college campus installations made up 5.4% of the overall installed solar in the U.S., a sector of the solar market that was valued at $300 million. According to research done at the Association for the Advancement of Sustainability in Higher Education (AASHE), K-12 schools around the country spend more than $6 billion a year on energy. The California Department of Education estimates that California schools spend $132 per student each year on energy costs, which is more than the cost of school supplies and books per student.

Due to the high upfront cost of solar, the federal government encourages solar energy development through the use of tax credits from the solar Investment Tax Credit (ITC) fund. Unfortunately, non-taxable entities like schools are unable to take direct advantage of these incentives. In order to take advantage of the tax credits, schools are partnering with solar developers that will develop, own, and maintain the system in exchange for electricity payments made under a Power Purchase Agreement (PPA) or solar lease. Many schools find third-party ownership a feasible and simple way to install solar on their facilities because the solar installation is provided as a service without the up-front cost of owning the installation. With a Power Purchase Agreement, schools tend to pay less per kW, saving about 10% on their utility bills. After 15-20 years, the school has the option to purchase the system at fair market value or have it removed at the developer’s expense.

Currently, statistics show that Arizona has the most solar installations, with 117 arrays providing 50MW of solar electric capacity to college campuses. Arizona State University is ranked number one for the top campus for total installed capacity with 20MW. The state of California is in second place with 82 solar array installations spread across numerous campuses. The AASHE accredits the increase in solar installations to the variety of solar financing mechanisms, such as power purchase agreements and solar leasing, as well as significant decline in the price of solar modules.

Benefits of the Solar Array in Action

A community college in New Jersey with a solar PPA will not need to pay any upfront costs for their solar array. For the next 15 years, the college will be paying 8¢/kW compared to the 9.3¢/kW they were paying for electricity through their utility provider. The college will save $160,000 during the first year alone, with projections reaching as high as $1.6 million by the end of the 15 year contract.

Potential Tax Code Changes And How They Will Impact Solar Investment

The United States Senate recently showed its support for renewable energy and the importance of its storage, through signing the…

Performance based incentives (PBI), investment tax credits, and other incentives allow the solar industry to grow with a variety of… 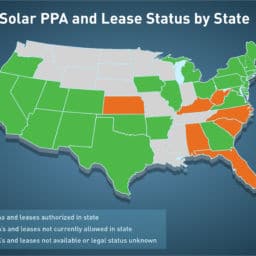 Solar PPAs: The State of the Market

Despite opposition from some utilities and state governments, solar Power Purchase Agreements (PPAs), have continued to see a steady increase in adoption, as more states have adopted legislation allowing for easier access to solar financing…

0
29 Oct 2020
The ITC Cliff: Will solar be economically viable without the ITC?

Solar financing solutions have allowed the solar market to grow at a record rate in recent years. By 2020, it…

0
31 Jul 2019
Solar Securitizations: What Can C&I Learn From Residential?