Solar Securitizations: What Can C&I Learn From Residential?

The asset-backed securities (ABS) market has provided a viable means of financing to several asset classes for decades.  In the solar industry, residential players like Solar City, Sunnova, Mosaic, Spruce, and Sunrun have utilized the ABS market for several years.

Residential securitizations have exceeded $500mm thus far this year, highlighted by Sunnova’s  debut securitization, with several additional financings rumored to be on the horizon for the residential market.

With year-over-year solar market growth exceeding 90% in 2016, the apparent demise of YieldCos, and new institutional capital entering the solar market, it’s likely we will see solar securitization growth in 2017 and beyond. Yet, aside from a few whispers, the C&I market has been absent from a presence in ABS.

Why is C&I late to the game?

Looking at the published assigned ratings from Kroll for each of the residential solar and efficiency financings, and the criteria established by Kroll’s General Rating Methodology for ABS, it was clear that a few boxes need to be checked when looking to the ABS markets:

Other criteria is certainly considered (resume of sponsor, technology, etc.), however, when comparing residential to C&I based on this criteria, one can see why C&I falls short. 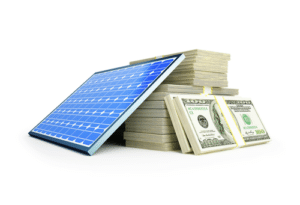 The maturity of the residential asset class has led to several large players and billions of tax equity dollars dedicated to a programmatic financing approach, and a high volume of cash-flowing assets, to-date. Relatively higher residential utility rates have allowed for a larger national geographic footprint compared to C&I, providing a long runway for the asset class to mature. Nearly a decade in which developers, investors and energy companies have thrown resources at the industry and fine-tuned their development, construction and operating efforts has led to a high volume of performing assets.

The C&I sector is challenged by a smaller geographic footprint, and is scattered with small to mid-sized developers. These developers, compared to their residential counterparts, are relatively new to the industry, and a large portion develop to sell,not to own. This dilution of assets among a smattering of C&I players, is partially responsible for a lack of aggregated portfolios and thus, volume. Like any other capital intensive industry with long term income potential, the market of institutional investors is impacted by the supply of mature alternative investment opportunities. As new institutional and strategic investors join the solar industry, developers will strengthen their balance sheets and be able to produce a larger volume of cash-flowing assets. That critical mass should be reached soon.

With so many small to mid-sized developers having a market presence in C&I, standardization has been absent, based on each developer’s unique circumstances. As an example, a C&I developer may rely upon a regional bank to provide construction and permanent debt on assets developed within the geographic footprint of the bank. The bank’s requirements might be quite different than those in other geographies, or might be less stringent than a larger nationwide bank, especially on topics involving credit and real estate. This variance can find its way into counter party agreements and ultimately prevent documents from being standardized. Another example lies in developers who develop to sell and not to own. A developer who’s looking to offload its projects, may not object to an off-taker having buyout provisions added to a solar services agreement, while those who take a long-term view may very well object. As the challenge for volume production is met by means of new capital invested into C&I, it’s conceivable to believe that larger developers will/can adopt a programmatic approach and standardize documents, process and risk analysis and can look to ABS for financing.

When it comes to credit ratings, the residential market utilizes the most accessible and widely used credit rating scale for consumers; the FICO Score. These scores have been synonymous with mapped default ratings and have been utilized by the ABS market for decades. Most solar securitizations boast average FICO scores of 720-750+.

For C&I a comparable rating scale for unrated entities has not yet been widely accepted by the industry. There are certainly benchmarks that exist that have mitigated risks in the eyes of current equity investors, but none have been universally accepted.

When financing projects with bank debt, most unrated off-takers are subjected to a bank’s corporate credit analysis. Some banks will sign off on the use of a third party’s rating scale (i.e. Moody’s Risk-Calc or shadow ratings), but will still utilize balance sheet & income statement ratio checks.

Is there a scale that can be adopted by the industry?

If there’s anyone that should be answering that question, it’s the rating agency that has assigned ratings to each of the major solar securitizations in recent years; Kroll Bond Rating Agency.

While evaluating credit risk for solar off-takers, Kroll will either a) utilize a public rating or b) conduct a credit analysis in determining probability of default for unrated entities. Each entity’s rating is weighted based on the discounted income attributed to the overall portfolio, and a Monte Carlo simulation is performed in order to forecast defaults.

In evaluating the near ABS miss of AES in 2015, it was clear that a lack of an industry accepted credit benchmarks led to underwriters wanting a higher bond spread than what was offered. In other words, credit risk wasn’t mitigated to a point where the offered spreads were reasonable.

Due to scattered ownership for C&I an absence of data exists to support the accuracy of any particular credit rating benchmark. However, as volume increases, data will exist to serve as a basis for projecting defaults on a go forward basis.

The C&I sector has a few years to answer these questions, before the ITC is stepped down, thus requiring a lower cost of capital. With new capital coming to the marketplace and developers growing their balance sheets & assets under management, we’re nearing the critical mass needed for C&I and ABS to converge.