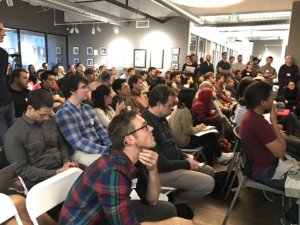 The 4th annual Suncode Solar Hackathon, taking place in Oakland, CA on April 8th, 2017, saw a great turnout with fierce competition. The event, sponsored by Sunrun and DSM, and hosted by solar incubator and accelerator company Powerhouse, drew over 150 attendees, forming 23 teams for the competition. The teams were created Friday night, with each team consisting of a few developers and at least one solar industry professional, as suggested by Powerhouse.

The hacking began Friday night with the goal of launching an energy startup aimed at creating a solution to help advance solar industry growth. The teams were given suggested challenge questions to solve, but could solve alternative solar issues identified by their teams. The Sunrun sponsored challenge question that most groups aimed to solve was the following:

“Reimagine the Solar Homeowner Experience. What are customers interested in knowing about? How do they want to interact with the system? How do we maximize value for both the customer and the solar company? At what point in the process do they want a portal? Create a demonstration portal.”

The pitches began at 6:30 and continued into the late evening. Overall, the turnout of the event was great, with only standing room left by the end of the night.

My personal favorite pitch, which ended up being voted the people’s choice award, was REC Chain. The concept was to use Blockchain to validate and facilitate fair trading of Renewable Energy Certificates. The pitch seemed so complex that after the two-minute presentation, one judge asked if they had worked on this project before the Hackathon! The answer was of course no, as all participants were required to only work on their concept the day of the event. Instead, their work highlighted the advances that can be achieved over the course of a day when the bright minds of the California solar industry are gathered together.

While there were a variety of submissions, common themes that came up during the event were optimizing battery storage, qualifying marketing leads, and developing software optimization applications. There were a few that went off the beaten path, such as Independence American Media, which aims to alleviate the partisan nature of our clean tech news. The Energy Escort team also had an interesting app that simplified the process for customers to determine if they are using too much energy in real time. The app screen turns red for electrical overuse at high rate times, yellow if you should slow down on energy use, and green if it made sense to continue consuming energy.

Overall, the event embodied the entrepreneurial startup spirit that I had hoped for, and presented innovative ideas and concepts that addressed top solar industry issues. It will be interesting to follow how the teams that formed during the event develop, as this event has been the breeding grounds of numerous notable solar companies including Utility API, Powerhive, and Sunswarm.