At its onset, few could have predicted the severity of the impact COVID-19 would have on the commercial solar industry, as well as the renewable energy industry. While delays on several existing projects have been mitigated due to an allowance of construction in several territories, the impact on future pipelines may be significant considering the number of parties required to sign off on new projects.

There is considerable hope for a quick recovery for the commercial solar industry though, as demand for clean energy remains robust, making the resurgence of the C&I solar market more of a when, rather than an if.

The Current State of the Solar Market 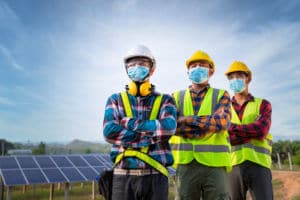 Recent reports have shown a decrease of roughly 594,000 jobs within the renewable and clean energy market since the COVID-19 outbreak. While many hope that these job losses will end up as temporary furloughs, the reality remains that the workforce, as well as the industry’s collective pipeline, will be significantly impacted in the short term.

Prior to March, the solar industry was one of the fastest-growing segments in the country, expanding by 10.4% in the past 12 months to almost 3.4 million jobs. These numbers highlight the solar industry as the single largest employer of Americans within the energy industry, as a whole, before the onset of COVID-19.

The current situation for most solar developers has resulted in indefinite delays on most existing projects, due to halted permitting, supply chain interruptions, and most importantly, the inability for workers to safely interact on the job site until state restrictions are eased. There is a good chance that the industry will see faster than average completion of existing projects when social distancing measures are lifted, as many projects remain contingent on hitting ITC deadlines before the next step-down in 2021. This will likely boost job numbers as the industry will need to replace a large amount of the workforce that has been laid off or furloughed recently. 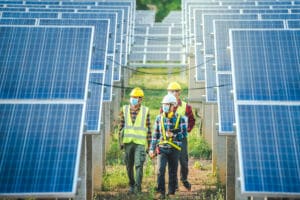 Unlike other struggling industries such as service and hospitality, it will likely be a lot easier for energy workers to maintain safe distancing protocols on the job site, meaning recovery may happen a lot faster for the commercial solar industry compared to the U.S. job market as a whole.

In some key solar states, such as California, construction IS still permitted on a state-wide basis, however, local orders in certain counties may still restrict construction to specific types of projects. With proper protective gear, it will likely be possible for paused projects to resume construction in many states at the time being, as bans in even the most restrictive of states are starting to be lifted.

For the time being, one of the best things that solar developers can do to spur sales is to educate potential clients on how financing mechanisms like PPAs can alleviate cash outlays and reduce operating costs in both the short and long term. Many potential off-takers may shy away from a new solar project in these uncertain times due to misconceptions about upfront costs and other fees, which is why sharing info on programs such as SCF’s new $0 Year One Solar Stimulus PPA can help to continue filling your pipeline in preparation for re-opening.

How The ITC Step-Down Will Impact Commercial Solar PPAs

As we enter the latter half of what’s been a volatile year for the solar industry, (and most industries) developers…

0
10 Jun 2020
The ITC Cliff: Will solar be economically viable without the ITC?